If you’re like most people, you probably think of scar healing when you think of vitamin E. And you’re not wrong—but you’re not right either. Although vitamin E is considered essential for skin health, the evidence linking it to scar healing is mostly anecdotal.1 What research does show, however, is that vitamin E boasts impressive antioxidative capacities that translate to more than just healthy skin.2,3 In this article, we talk about the importance of antioxidants, and how vitamin E in particular can help maintain oxidative balance in cells and tissues throughout the body.

Antioxidants and Free Radicals: What are they and why do we need them?

Antioxidants are substances found in fruits and vegetables (and yes, certain other foods like dark chocolate) that help protect your cells from a chemical process called oxidation. Put simply, oxidation is any chemical reaction that involves the loss of electrons. More specifically, it is what happens when highly reactive and unstable molecules called free radicals steal electrons from other molecules.4

Free radicals are any molecules with an uneven number of electrons, which makes them highly reactive with other molecules. They are naturally formed by the body (for example, when we exercise or convert food to energy), but can also result from exposure to environmental sources such as air pollution, cigarette smoke, and sunlight.4,5 At low or moderate concentrations, free radicals are vital to human health, and can act as weapons for the immune system.6 However, when there are too many free radicals to be kept in balance by antioxidants, they can cause damage to lipids, proteins, and DNA in the body.4–6

For example, think of an apple. As soon as the flesh of an apple is exposed to oxygen in the air, it begins to turn brown. This is because oxygen atoms in the air interact with molecules in the apple to form reactive oxygen species (which include free radicals). These radicals start to break down the apple (i.e., oxidize it) and it begins to rot. Unfortunately, a similar process of oxidation and accelerated aging takes place in the body when cells are exposed to free radicals.4,5 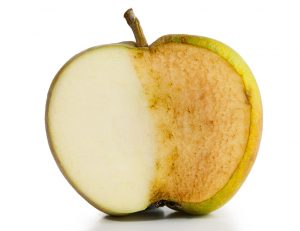 Vitamin E is the collective name for a family of eight fat-soluble compounds that stop the production of reactive oxygen species when fat undergoes oxidation. You may be thinking, “That’s great—but do we really care what happens to fat?” The simple (and emphatic) answer is, “Yes!”

Despite its less than stellar reputation, fat makes up most of the structural elements in our body’s trillions of cells and is necessary for cellular health and function. To name just one of its important functions, it helps form the lipid bilayer that regulates what enters and exits our cells. For this reason (and many others), protecting fats from oxidation with vitamin E antioxidants is key to preserving cellular function.3,6

The vitamin E family includes four tocopherols (alpha-, beta-, gamma-, and delta-tocopherol) and four tocotrienols (alpha-, beta-, gamma-, and delta-tocotrienol). In addition to being fat-soluble (meaning they can be stored in fatty tissues), tocopherols and tocotrienols have structural qualities that make them especially effective as antioxidants.7 All eight vitamin E forms are perfectly suited to associate with lipids in cell membranes while protecting them from oxidative damage. Each form possesses a long “root” that anchors them within the membrane lipids. Sticking out from this root is the “head” part of vitamin E, which is the antioxidant.

Alpha-tocopherol is the predominant form of Vitamin E in the body, and the most common form found in vitamin E supplements. Thanks to its protective effect against the oxidation of polyunsaturated fatty acids (which are enriched in the membranes of immune cells), alpha-tocopherol plays an important role in regulating immune health.8,9 In addition to its well-established antioxidant actions, alpha-tocopherol supports healthy blood-clotting and can suppress enzyme activity involved in abnormal cell growth.10

These findings underscore the importance of viewing vitamin E as a family of compounds and the value in supplementing with more than just alpha-tocopherol.

Do I Need to Take a Vitamin E Supplement?

If you eat your fair share of green leafy vegetables, whole grains, nuts, seeds, and vegetable oils, you probably get enough vitamin E from your daily diet.  However, it is worth acknowledging that several national surveys indicate that the average American diet provides less than the recommended 15 mg of vitamin E per day.21,22 Concerns for vitamin E status are especially relevant for people with digestive issues or trouble absorbing fat, who are at a greater risk of vitamin E deficiency.23 If you think you may be at risk of vitamin E deficiency—or are someone who could benefit from additional antioxidant support—we encourage you to speak with a healthcare professional about whether taking a vitamin E supplement is right for you.

Fat-soluble: Able to dissolve in fats or fat solvents; fat-soluble vitamins are absorbed along with fats in the diet and can be stored in the body’s fatty tissue.

Free radicals: Any molecule with an uneven number of electrons.

Lipid bilayer: A structure consisting of two layers of fat molecules organized in two sheets; the barrier that marks the boundaries of a cell and regulates what enters and exits.

Lipid peroxidation: A metabolic process in which free radicals steal electrons from the lipids, which causes damage to the lipid molecule.

Oxidation: A chemical process in which a molecule loses electrons.

Reactive oxygen species: A type of unstable molecule that contains oxygen and easily reacts with other molecules in a cell.

You may have heard about melatonin’s role in sleep regulation, but did you know that this hormone also impacts respiratory health?

Children
The Importance of Lutein and Zeaxanthin for Kids

Increasing exposure to harmful blue light and inadequate nutrition mean that many children are not getting the nutrients they need for optimal visual health and development. Luckily, we have a simple solution for both.

Lifestyle
What is Melatonin?

You may have heard of melatonin, but what is it? Where does it come from? And what does it do besides help you sleep?

Looking for evidence-based nutritional strategies to give your immune system a natural advantage? Look no further.