The Health Benefits of GLA

Today we’re talking about essential fats. And no, we don’t mean chocolate or whatever other beloved comfort food is helping you get through the pandemic—we’re referring to the fats that your body needs to function normally but can’t synthesize on its own. You know, those essential fats.

Before we get into the specifics, let’s review a few basic facts about essential fats. (Or, if you’re looking for a deeper dive into the science of things, check out our article on essential fats here.) 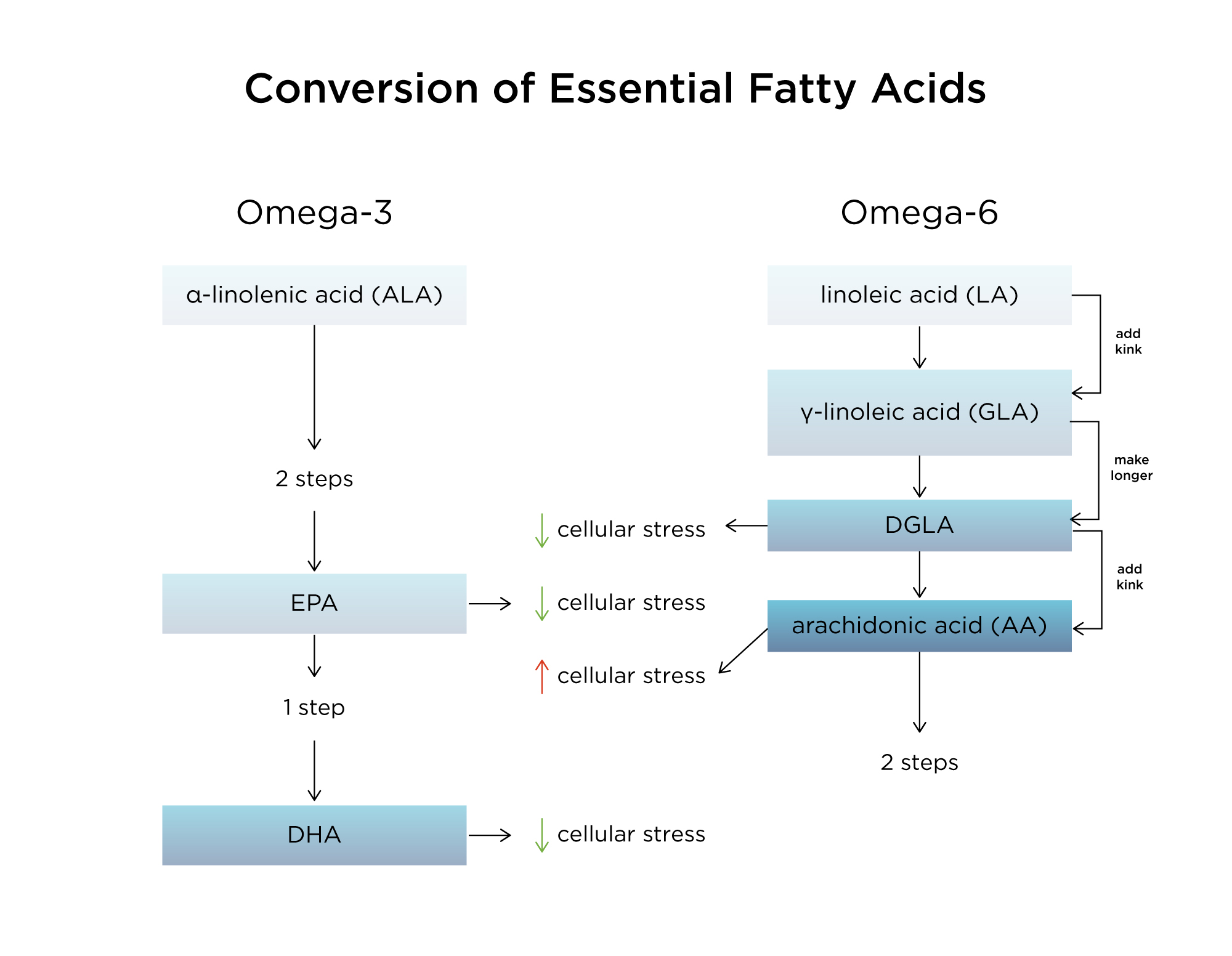 Okay, so now that we’ve laid out a few basics, let’s jump into what makes GLA so exceptional.

GLA: The Omega-6 that Identifies as an Omega-3

GLA is the black sheep of the omega-6 family. In fact, if the two PUFA families were ever to face off on Family Feud, there’s a good chance GLA would find themself on the omega-3 team. This is because, despite deriving from omega-6 LA, GLA and most of its metabolites work to resolve cellular stress rather than promote it.6

One way GLA does this is by converting into eicosanoids that help the body mount a healthy response to inflammation. Referring to our figure, GLA can do this by first turning into DGLA, which is then turned into molecules that help resolve cellular stress.6 This is in contrast to the pro-inflammatory eicosanoids that are created from the omega-6 AA.”

Another way that GLA supports cellular health is through competitive inhibition. Basically, DGLA competes with AA for access to the enzymes (i.e., cyclooxygenase and lipoxygenase) that create eicosanoids, either inflammation-promoting or -resolving.2,6 This means that the mere presence of DGLA in tissues can help lower the output of AA’s eicosanoids by inhibiting their production and/or blocking their transformation.7–9 Ultimately, this translates to fewer pro-inflammatory eicosanoids and less cellular stress.

GLA and EPA: Better Together

Not to rain on the GLA parade, but there is a slight drawback to supplementation. If you refer to the figure, you see that its product, DGLA, can form AA. This means that increases in DGLA will typically cause an increase in AA. However, an effective way to reduce the amount of AA synthesized from DGLA is to combine GLA with the omega-3 EPA.

In addition to inhibiting the conversion of DGLA to AA, EPA is also believed to enhance the conversion of GLA to DGLA. This has been evidenced by several studies, including an animal study where supplementation with a combination of GLA, EPA, and DHA led to higher DGLA content in the blood of rats than supplementing with GLA alone.11–13

To recap, these studies suggest that EPA not only enhances the conversion of dietary GLA to DGLA, but also inhibits further conversion of that DGLA to AA. To clarify, this doesn’t mean you can’t take GLA without EPA; however, combining it with EPA appears to enhance the positive effects (GLA conversion to DGLA) while reducing the occurrence of negative effects (the conversion of DGLA to pro-inflammatory AA).

But that’s not all. What GLA does at the cellular level appears to have positive effects for the whole body. In particular, studies suggest that GLA supports whole-body wellness and skin health by ameliorating cellular stress in the joints, improving the texture and appearance of skin, and reducing transepidermal water loss (TEWL).

For those of you unfamiliar with TEWL, it is a widely used measure of skin barrier function that quantifies the amount of water that evaporates from the skin surface. Lower TEWL values are associated with greater skin barrier function (because less water is evaporating from the skin), whereas higher TEWL values are associated with unwanted skin conditions, including more pronounced fine lines and wrinkles.14,15 Fortunately, several randomized, double-blinded, placebo-controlled trial studies suggest that GLA can help decrease TEWL values and support skin health.2,6

Dietary GLA: Where to find it

Wondering if you need to add some GLA to your life? While the only real way to determine your GLA status is through fatty acid panel testing, research tells us that specific individual factors can make an individual more susceptible to low GLA-status. These factors include age, diet, genetic variations, cigarette smoking, alcohol consumption, and stress.20–25 If any of these factors apply to you (of if you just want to give your cells a little extra love) you may want to consider upping your GLA game with a dietary supplement.

GLA can be found in relatively high abundance in the plant seed oils of borage, black currant, and evening primrose. Out of these primary sources, borage oil contains the highest amount of naturally occurring GLA, and is often used for dietary supplementation.2,6

There are no established guidelines or recommendations for GLA usage; however, doses as small as 200 mg/day to as large as 3 g/day have shown to be safe, effective, and well tolerated.15,26 As with any dietary supplement, you should speak with your doctor or nutritionist about what dose of GLA would best fit your individual health needs before starting a GLA regimen.

So, what have we learned here today?

But don’t just take our word for it. Talk to your doctor about adding a GLA supplement to your diet and experience its positive effects on cellular and skin health for yourself.

Competitive inhibition: Interruption of a chemical pathway owing to one chemical substance inhibiting the effect of another by competing with it for binding or bonding.

Eicosanoids: Signaling molecules that derive from essential fatty acids, and are involved in modulating the intensity and duration of immune and inflammatory responses.

Phospholipids: A major component of all cell membranes; type of lipid molecule made up of two fatty acids, a phosphate, and a glycerol molecule.

Polyunsaturated fatty acids (PUFAs): Fatty acids that contain more than one double bond in their backbone.

Transepidermal water loss: When water passes from the dermis through the epidermis and evaporates from the skin’s surface; TEWL measurements are important for evaluating skin barrier functionality.

Do you know all the ways omega-3s can naturally support healthy, vibrant looking skin?

Nutrition
What causes collagen loss, and what can you do about it?

Concerned about losing collagen with age and how it will impact your skin? Good news, there are things you can do to help slow down the process!

You know antioxidants are good for you, but do you know why they are so important? Let’s spill the tea about vitamin E.